I moved to Berlin in October of 1987, not knowing what I was getting into! I planned on staying a year to see how I liked it, and ended up not returning to America until spring of 1997 from Riyadh Saudi Arabia.

In Berlin I worked for Tempelhof Airways, an American run airline that as well operated a Learjet 25 & 35 for the German government off of the American Tempelhof Air Force Base, which was in the center of town. We flew a Cessna Conquest and French Aerospatial Nord N-262 turboprops. Later on we received the first Saab 340 planes as well. 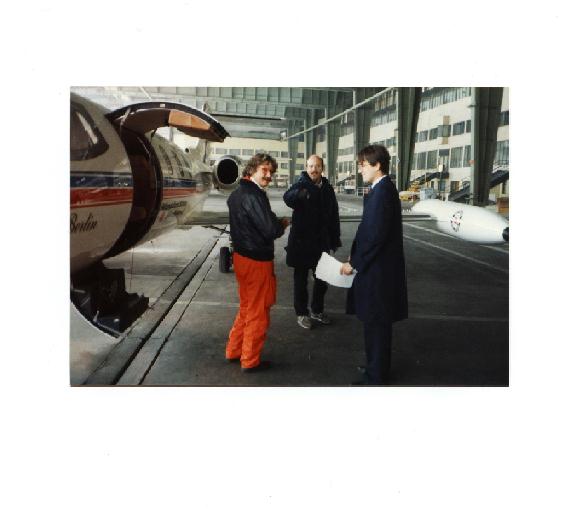 One of our favourite doctors, Dr. Klaus Voss. Klaus and I have been friends for years and we are still in touch. 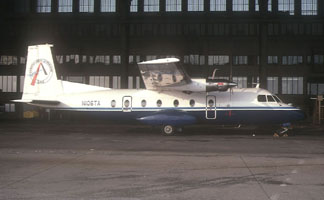 The whole fleet under the overhang, on one of the typical gloomy winter days in Berlin. You really had to be good at flying instruments as the weather there could be difficult, and there were little alternate airports if the weather really went down.

Life was good in Berlin, and we made the most of it. Having lots of young cute Berlin girls as our flight attendents did not hurt, nor did making $6000 a month tax free.

After two years the Berlin Wall fell, and on 9 November 1989 all of our lives changed. When the Gulf War (version 1) happened, our boss, Knut Kramer took some of our funds and made some shady deals with the Israeli's with some gas masks. The vast majority of the funds ended up in bank accounts other than the airline's and we shortly went bankrupt.

Miles Bennet and I were lucky enough to be hired by the parent company who owned the Learjet, the German Air Rescue (Deutscherettingsflugwacht) out of Stuttgart. One small problem is that we needed German pilots licenses. 1 years worth of tribulations later and we both finally got them but it was not easy...

If you can read German, the whole story is here:

In 1994 I was laid off from the DRF, officially due to "lack of business" but unofficially because they had lost a major insurance contract and the unemployment in Germany was so bad due to the fall of the Berlin Wall that they could not justify having a "ami" (American) working when so many Germans were without work. One of the copilots, Manfred Zimmerman, was also let go at the same time. After we took them to court and won a very large settlement (almost 250k DM) we both went on our ways. I just talked to Manfred last week and he is in the left seat of a Boeing B747 these days, doing very well.

I moved with my German wife Carola to Muenster Osnabruck, where she had taken the position of director of Nursing and head of the operation room at a new heart center.